Police said a civilian husband and wife were hit by gunfire as soldiers cornered the rebels in the couple’s house. 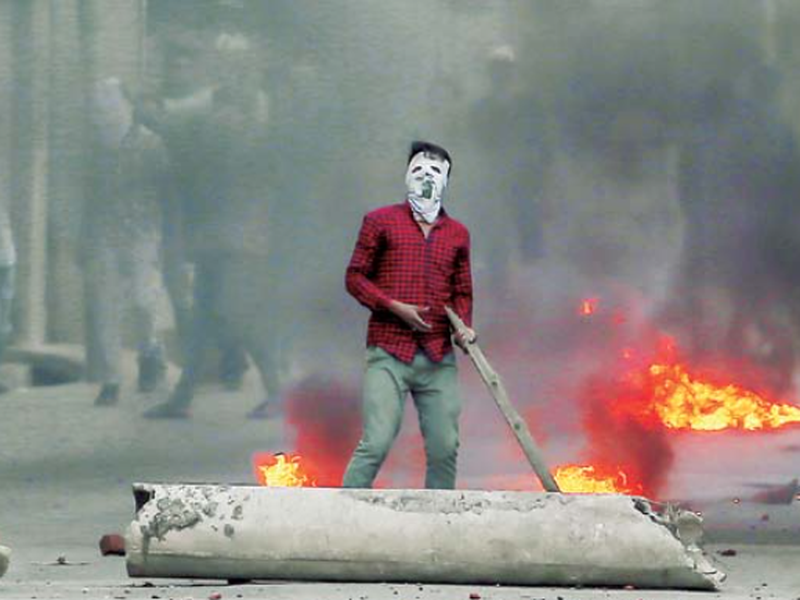 A masked Kashmiri protester watches from a distance as Indian policemen fire tear gas shells towards him during a protest in Srinagar. (AP)

UNITED STATES.- At least four rebels, a counterinsurgency police official and a civilian were killed during a gunbattle in disputed Kashmir on Friday, triggering anti-India protests and clashes in which several people were injured.

Government forces raided a cluster of homes on a tip that rebels were hiding in the southern Srigufwara area and they came under fire from militants, police said.

Four militants and a police official with the counterinsurgency force were killed in the fighting, said Col. Rajesh Kalia, an Indian army spokesman.

Police said a civilian husband and wife were hit by gunfire as soldiers cornered the rebels in the couple’s house. Residents said the couple was not given time by government forces to leave their home. They were evacuated to a hospital where the husband was declared dead on arrival.

Police said at least two soldiers were also wounded in the fighting. As the fighting raged, protests and clashes broke out nearby and in other neighborhoods as residents tried to help the trapped militants escape.

Authorities suspended cellphone internet service in several districts in the region, a common practice to make organizing pro- tests more difficult, and according to the government, stop the spread of rumors.

Large anti-India protests and clashes later erupted on the outskirts of Srinagar, Kashmir’s main city, as thousands gathered to participate in the funeral of one of the slain militants who was from the area.

Protesters, chanting pro-rebel slogans and demanding the end of Indian rule in Kashmir, blocked a major highway and fought pitched battles with government forces. Several people were reportedly injured in the clashes.

Also on Friday, at least nine police and paramilitary soldiers were injured when rebels attacked their patrol with a grenade and gunfire in southern Tral town, police said.

India and Pakistan have fought two wars over Kashmir, which is divided between the neighbors but claimed by both in its entirety.